< Go back to Research Reports

Research Report: Using the CAREN for Human Performance Research at the University of Melbourne 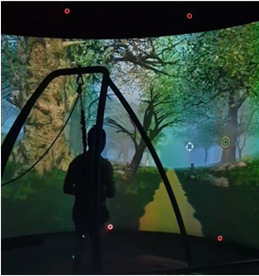 The CAREN lab at the UoM is used to replicate and measure real life movements within a wide range of applications including dual tasking for people with sports/ military injuries where the cognitive and physical impact of human movement are analyzed. The CAREN lab and its amazing computational modules in the D-Flow software allow us to investigate cognitive-motor interface (CMI) during gait at different speeds. The Cognitive task in this study involves searching for random visual targets in the virtual environment of CAREN.

Following placement of markers (HBM marker set), Electromyography (EMG) sensors, an aimer was given to the subjects to search for random targets in the virtual environment while walking. Subjects performed the following trials: standing + target search, normal walking, walking + target search and trials where walking, target search were combined with random perturbations simulating trip/slip. The combined time was around 40 minutes per individual. Joint movements, ground reaction forces (GRFs), target search performance and muscle EMGs were collected. The CAREN enables us to combine and synchronize both cognitive and biomechanical measures using its vast hardware and software packages (e.g. D-Flow) which cannot be easily implemented in traditional motion labs. 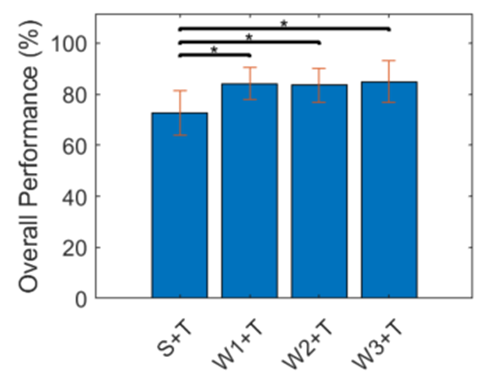 Target search performances or cost of dual tasking due to walking speed (bottom) for n=20 male participants. S: Standing, T: Target search, W1-W3: Walking at 2-4-6km/hr. The compassions are based on t-test. 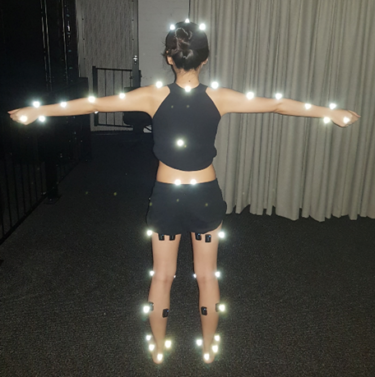 A participant at the CAREN lab with full body markers and EMG sensors before the experiment, CAREN lab at University of Melbourne, Melbourne, Australia

We developed a new protocol to investigate dual tasking protocols using CAREN system. This protocol enables us to study CMI i.e. the interaction between target search and biomechanical performances. Using the CAREN system, we found improved target search performance during dynamic movement vs. standing which highlights the role of enhancement of CMI. It was expected that walking would reduce the accuracy of the visual search, however, our results present a novel finding that requires more research such as the role of mechanical perturbation on CMI.

Walking can alter the performance of visual search; however, gait speed may not affect the overall performance. The CAREN lab was critical in designing this study. Our protocol has already found interest from a company developing body armor who aim to evaluate its performance during realistic scenarios. This finding has implications in a variety of areas including fall prevention programs and sport- or defense-related scenarios in which both cognitive and physical performances are required.