Case Report: Using the GRAIL for treating a patient with an asymmetric gait pattern. 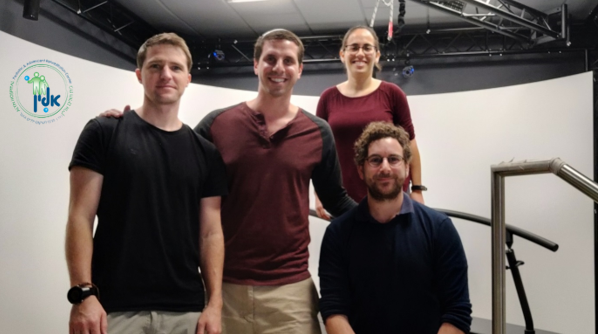 Arlene is a 16-year-old female who was involved in a road traffic accident in November 2015. Following the incident she underwent several surgical interventions to her right tibia and fibula, followed by physio- and hydrotherapy. In June 2019, Arlene was able to walk independently for around 500 meters and carried a pair of hiking sticks with her for longer distances. She did not experience any neurological symptoms or pain but was conscious of her asymmetric gait pattern, best described as a compensated right Trendelenburg pattern (left pelvic drop and side flexion of her trunk to the right during the right mid-stance phase of gait). Manual muscle testing also identified that Arlene’s right hip abductors were weaker than her left (grades 4 and 5, respectively), which may explain her gait impairments.

In conjunction with Arlene and her treating physiotherapist, it was decided to commence a bi-weekly biofeedback training session with the aim of normalising her gait pattern asymmetry. To achieve this goal a clinically feasible 8-marker biofeedback training gait application was chosen [1]. The application allows the patient to visualise the movements of their trunk, pelvis and legs in real-time through a 3D avatar. Patient specific tasks can then be visualised on the avatar representing their gait kinematics. In Arlene’s case, a blue line represented the movement of her pelvis in the coronal plane. If the blue line stayed within the target range visualised, she would receive a score. The training focused on reducing the left pelvic drop during the right stance phase. The training began in July 2019, twice a week, for a total of 6 weeks (12 sessions). Arlene was then seen one month after the final session to evaluate the carry over effects of the training.

In the first session Arlene walked without hiking sticks or handrails, using the self-paced treadmill algorithm. After an acclimatization period of walking on the treadmill, a baseline recording was initiated to calculate her average pelvis angles during the right gait cycle. Arlene then worked on normalising her pelvic obliquity using feedback from the 3D avatar. From then on each training session consisted of the following:

Prior to starting the biofeedback training Arlene underwent an evaluation of her hip abductor strength using a handheld dynamometer, repeated in the final training session. This was performed to determine if any change in pelvic obliquity was related to changes in her hip abductor strength. In order to isolate the gait training to the biofeedback protocol on the GRAIL, it was agreed with Arlene’s physiotherapist that she would not work on gait quality during her conventional physiotherapy treatments, focusing instead on strengthening, stretching, stamina and education for self-management. Following completion of all 13 sessions, pelvic obliquity angles normalised to the gait cycle (right initial contact to right initial contact) were extracted from the baseline walking of the first session, the twelfth session and thirteenth session. There were a minimum of 25 gait cycles for each trial. 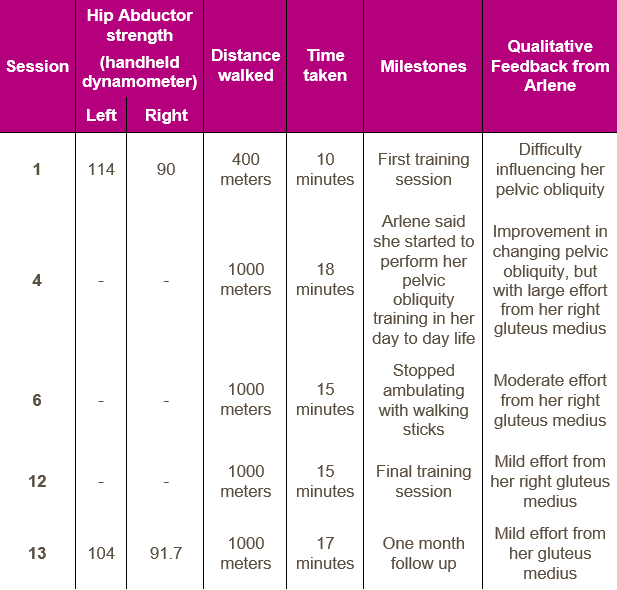 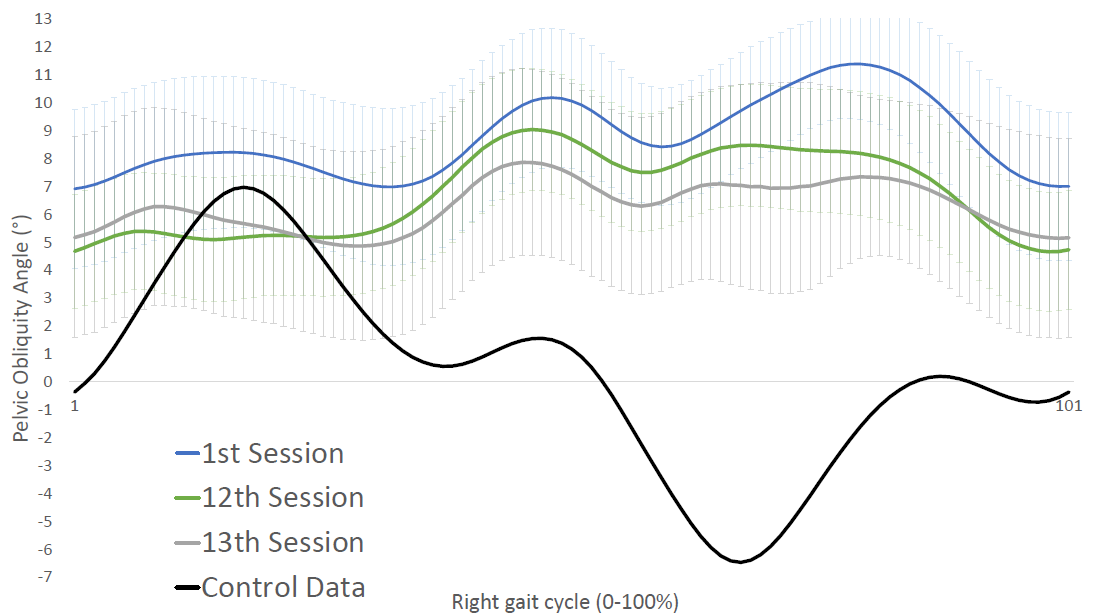 Figure 1: Pelvic obliquity angle during the gait cycle in the 1st, 12th and 13th session.

A normalisation was identified in Arlene’s gait pattern following the biofeedback gait training, without any meaningful change in hip abductor strength and only mild improvements in her pelvic obliquity angles. Therefore, the changes may have been due to motor learning, specifically Arlene redefining how she uses her right hip abductors during gait. This was also suggested by the feeling of effort from her right hip abductors during training, gradually decreasing as she progressed. There were several major milestones during the training. The first was after the fourth session when Arlene stated “I visualise the 3D avatar in front of me when walking along the street”, taking her training into her day to day life. The second was prior to the sixth session, when Arlene arrived without her hiking sticks. This may have directly related to her training on the GRAIL which was performed without the use of hiking sticks or handrails. On the topic of endurance, Arlene also managed to increase her walking speed to reduce the amount of time it took to walk 1km, whilst simultaneously performing the pelvic obliquity training. When Arlene was evaluated one month after the twelfth session, the time it took to walk 1km slightly increased, but the gains from the training were still evident. As such, the proposed biofeedback training protocol is now being implemented clinically to other orthopaedic patients to assist in normalising their gait pattern, now with an emphasis on motor learning as well as muscle strengthening and endurance.

The biofeedback team consists of five physiotherapists, an occupational therapist and an orthopedic surgeon. Training with the GRAIL has been undertaken in patients with various pathologies, such as orthopedic complications, traumatic brain injury, cerebral palsy, spinal cord injury and most recently following osteosarcoma. The aims and goals of training are always clinically driven with an emphasis on maximising activities of daily life.