Case Report: Using the GRAIL with an Ataxic Patient

Our rehabilitation center has a lot of experience in the field of rehabilitation of children and teenagers with neurological diseases. In the last years the impact of technological devices has opened up new, interesting possibilities to improve the motility of our patients.

In this case report we would like to share our experience with the training using the GRAIL system for ataxic patients.

INITIAL EVALUATION
The patient, a 23 year old male, underwent cerebellum surgery as a consequence to ependymoma, located in the 4th ventricle. He started the rehabilitation on the GRAIL two months after the surgery.
At the beginning of the training his walking pattern was altered and consisted of an ataxic gait, with enlarged step width. The movements of his right leg, most involved in his disease, were clearly irregular, not smooth and presented the typical fragmentation (as illustrated in the following graphs obtained using the Gait Offline Analysis Tool). It is possible to observe how each single step was different from others, a typical feature of ataxic walking. In addition, at the beginning of the treatment the patient completed a six minute walking test (6MWT) covering 465,5 m, and was assessed with a score of 8 at the Functional Assessment Questionnaire (FAQ). 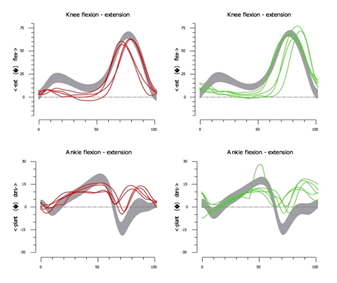 The main goal of the training was to correct his walking pattern, considering the irregularity of the steps (particularly on the right side). Since the patient was very compliant, it was possible to work on kinematics. With the GRAIL application named ReTraining, he understood how to selectively control each joint (hip, knee and ankle). Once this goal was achieved, he was trained with the MMgait application, showing him his kinematics (and the reference to the normative data) simultaneously: he learnt to correct his activation timings and to consolidate this pattern thanks to the repetitive task.

The secondary aim was to improve his balance control and stabilization of the Center Of Mass (COM). For this reason, he was trained with the GRAIL applications named Perturbation (with various modalities) and COM, and he tried to reduce his lateral sways.

Beyond these exercises, he was trained with more playful applications with the aim of reducing step width, increasing balance reaction and better adaptation to environmental stimulations.

In the PT sessions he tried to consolidate the lessons learnt during GRAIL training.

CHALLENGING THE PATIENT
These rehabilitation protocols did not offer, for the characteristics of the abovementioned exercises, a progression in the difficulty. However, when he learnt how to perform better, these trainings were accompanied by the request of physiotherapists to walk only on one belt, thereby narrowing the step width.

The patient was very happy to participate in these sessions, and he found the visual feedback very useful. By understanding how he walked, he was able to improve his pattern towards the normative data.

We choose to alternate the more difficult sessions, in which we worked on improving the gait pattern with other, more playful applications (e.g Rope Bridge, Traffic Jam) to improve engagement. 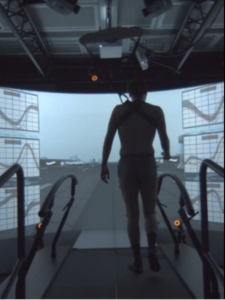 After this training, the patient significantly improved his walking pattern, at each joint, both on the left and right side. His steps were smoother and the fragmentation, that was particularly evident on the right side, was reduced. From the graphs at T1 (post-training), a reduction of gait variability can be seen. There is also evidence of consolidation of the gait pattern, which got closer to the normative data. 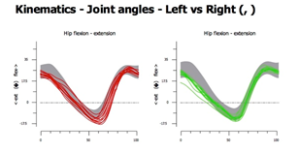 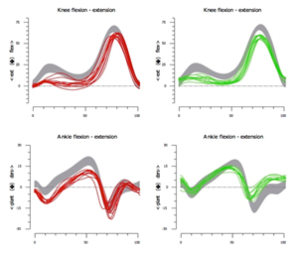 The patient found his rehabilitation program very helpful, because he learned how to change his walking pattern thanks to the feedback, resulting in more fluency and less variability in his steps. At the same time, he improved his balance; a fundamental ability for everyday life.

Since good results have been achieved with this treatment, we proposed the same protocol to other ataxic subjects.